North Korea has tested an intercontinental ballistic missile. The last time North Korea tested an ICBM was in 2017. The ICBM reached a maximum altitude of at least 3728 miles and landed 170km west of Aomori, inside of Japan’s exclusive economic zone (according to the Japanese Coast Guard). The Japanese Vice Defense Minister has just commented saying the ICBM flew higher than the 2017 Hwasong-15 test.

9:07 AM North Korea’s new missile has a range of up to 15,000 kilometers, putting most of the world within reach. 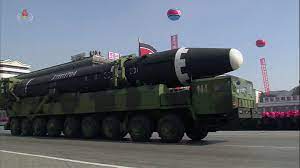