Despite sanctions imposed by the United States, United Kingdom, and European Union, Russia is on pace to make more money this year selling oil than it did before western sanctions.

According to market analysts with Bloomberg, Russia is projected to rake in $321 billion from energy exports in 2022, up more than a third from 2021. In addition, Russia is outperforming their own estimates for the month of April and is expected to bring in $9.6 billion more in energy sales than previously estimated. Analysts say that sanctions have increased demand for oil which has moved prices globally.

Like many oil exporters, Russia has been able to cash in on higher oil prices….thus increasing the revenue generated from oil exports. While sanctions do have an impact on where Russia can sell their oil, Russia is staying competitive by lowering prices to numbers that make countries move forward with purchases. Since the war in Ukraine, China and India have increased imports of Russian oil. India has taken in approximately 13.4 million barrels since late February (compared to 16 million for all of 2021)

Being transparent: Russia did experience a dip in oil revenue last year due to COVID. Prior to COVID (2018 and 2019), revenue was slightly above current levels now. 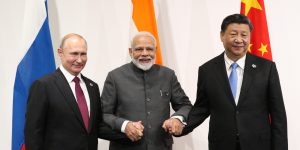