Russia’s deputy defense minister says that the Russian government has decided to “cut back” operations near the Ukrainian capital and another major city in order to “increase mutual trust” as both sides continue to negotiate terms that could end the war. In a statement, Deputy Minister of defense Alexander Fomin said “given that the talks on the preparation of an agreement on the neutrality and non-nuclear status of Ukraine have moved into a practical field… a decision has been made to radically… reduce the military activity in the areas of Kyiv and Chernigiv”

Following the announcement, the  Ukrainian military has confirmed that Russian troops are now withdrawing around Kyiv and Chernihiv. The news comes after Russia and Ukraine held talks in Turkey that could lead to a ceasefire or the war ending. 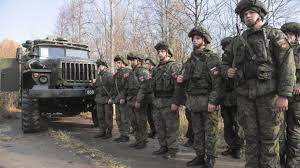