A Marine who posted several videos harshly criticizing President Biden and U.S. military leaders over the withdrawal from Afghanistan has pleaded guilty to multiple criminal charges

Marine Corps Judge Col. Glen Hines found Lt. Col. Stuart Scheller guilty after he entered guilty pleas to all five charges he faced — including ‘contempt towards officials,’ ‘disrespect toward superior commissioned officers’ and ‘failure to obey order or regulation’ — after videos of Scheller criticizing military leaders about their handling of the withdrawal went viral.

Scheller posted his first video on Aug. 26 after a suicide bombing at Hamid Karzai International Airport in Kabul blasting top brass and the Secretary of defense. “I’m not making this video because it’s potentially an emotional time,” he said.  “I’m making it because I have a growing discontent and contempt for my perceived ineptitude at the foreign policy level and I want to specifically ask some questions to some of my senior leaders. He also highlighted that he had “a lot to lose,” including his rank, retirement, and “family’s stability” by making the video.

Scheller was fired as the commander of the Advanced Infantry Training Battalion at Camp Lejeune after he posted his first video. 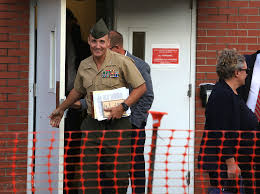